100 years ago, after 123 years of its non-existence on a map, Poland has regained independence. On this special anniversary, I have teamed up with @pologne.cultures.actuelles  to share some of the best Polish architecture, located both in Poland and in France.

It is fair to start with some historical background, recalling the architecture of Gdynia being the pioneer of Modernism in Poland.

Today, Gdynia is an important port city as well as a seaside resort situated in the Gdansk Bay, on the southern coast of the Baltic Sea.

During the intensive rebuilding of the economy after the First World War, a major decision has been made on the construction of the port.

In the 20’s and 30’s, the port and entire city were built from scratch, in the place of a fishermen´s village, by the best Polish architects and engineers. They aimed to build comfortable, spacious and functional apartments full of light, creating modern architecture that refers to the best examples around the world. It was something unique in the scale of Europe, especially given the remarkable pace of work.

Since then, successive generations of architects have continued the modernist traditions of their predecessors.

Gdansk is a port city of great historical significance, located on the Baltic coast in Poland.

20 years after the end of the First World War, Gdansk became the place of the outbreak of the Second World War.

The IIWW museum became one of the symbols commemorating this event.

The architectural project has been conceived by the Studio Kwadrat in a collaboration with A-PLAN bis, after winning the competition.

The building´s dynamic silhouette is visible in the panorama of the city, and the red concrete panels make for an interesting and modern reference to the historic brick buildings of Gdansk.

The Museum of the Second World War in Gdansk is the largest historical museum in Poland, its main exhibition covers an area of almost 5,000. m2 (and is located 14 meters underground). The originators of the institution emphasized that the purpose of its existence is not only to preserve the memory and expand knowledge about the World War II, but also to show the tragedy and the cruelty of war.

After the Second World War, the gloomy time of the Soviet Union’s domination has been set for Poland.

After many social protests, in 1980, the “Solidarity” movement was born in the Gdansk Shipyard, which spread the idea of freedom also in other countries and contributed to the disintegration of the Soviet empire.

It is therefore not a coincidence that the European Solidarity Center was founded in Gdansk, next to the Monument to the Fallen Shipyard Workers.

The author of the project is the Fort architectural agency.

The building houses a permanent exhibition that tells the story of the “Solidarity” in a modern, interactive way. The form of the building refers to shipbuilding motifs.

The most known Polish architect that has ever designed in Paris is Stanisław Fiszer.

He is a graduate of Gdansk University of Technology. He opened his own bureau in 1972 in Paris.

Fiszer’s architecture is often described as eclectic. The architect’s output from the 80s and 90s is even postmodern to a certain extent.

Starting from the left, the examples above are: l’Hotel du Collectionneur, Centre d’accueil et de recherche des Archives nationales (CARAN) and headquarters of the André group. 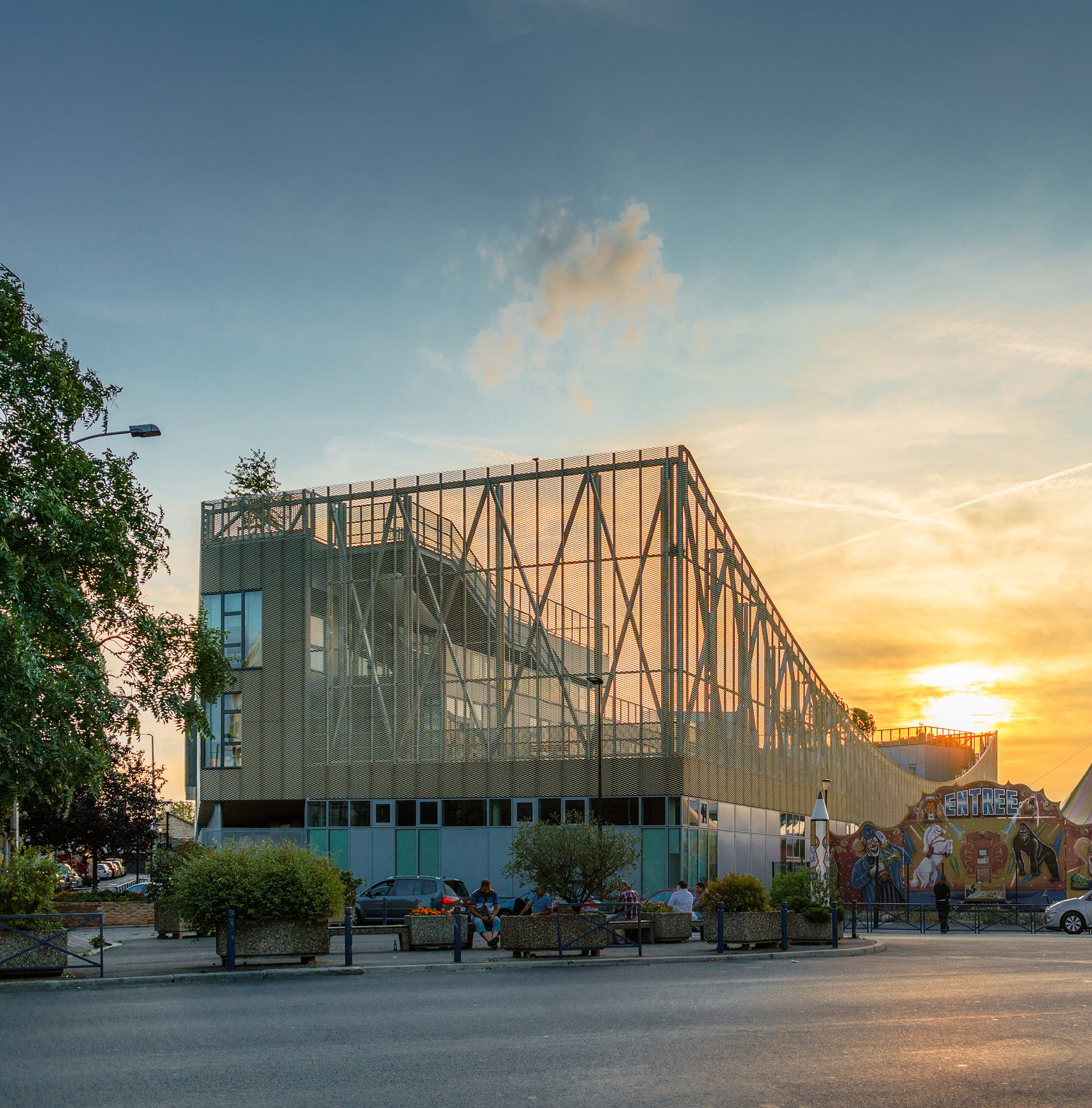 The new school group called “Chemin Vert” in the city of Aubervilliers, France is an interesting piece of contemporary architecture by the Archi5 studio whose one of the founders is a Polish architect Thomas Dryjski.

Facing the city, the whole building façade is made up of golden expanded metal mesh. It acts as a view breaker, ensures students’ privacy, gives protection, serenity and thermal comfort to the South and West façade. 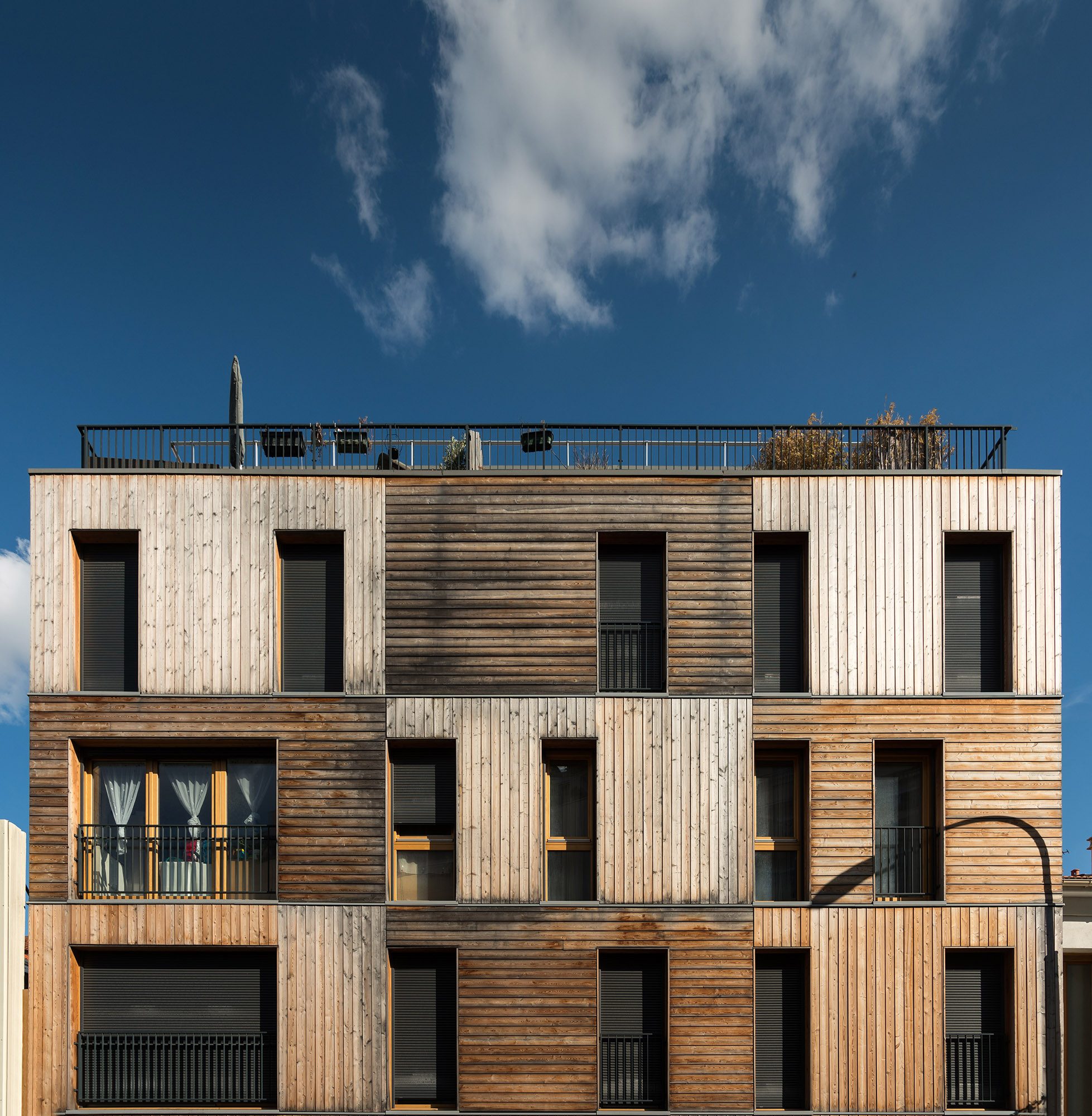 Another successful and very visually appealing piece by Studio Archi5 is the minimalist Condorcet dwelling in Montreuil.

This eco-friendly building features extensive use of wood both outside and inside, that contributes not only to the great aesthetics, but also low environmental impact and high energy efficiency. 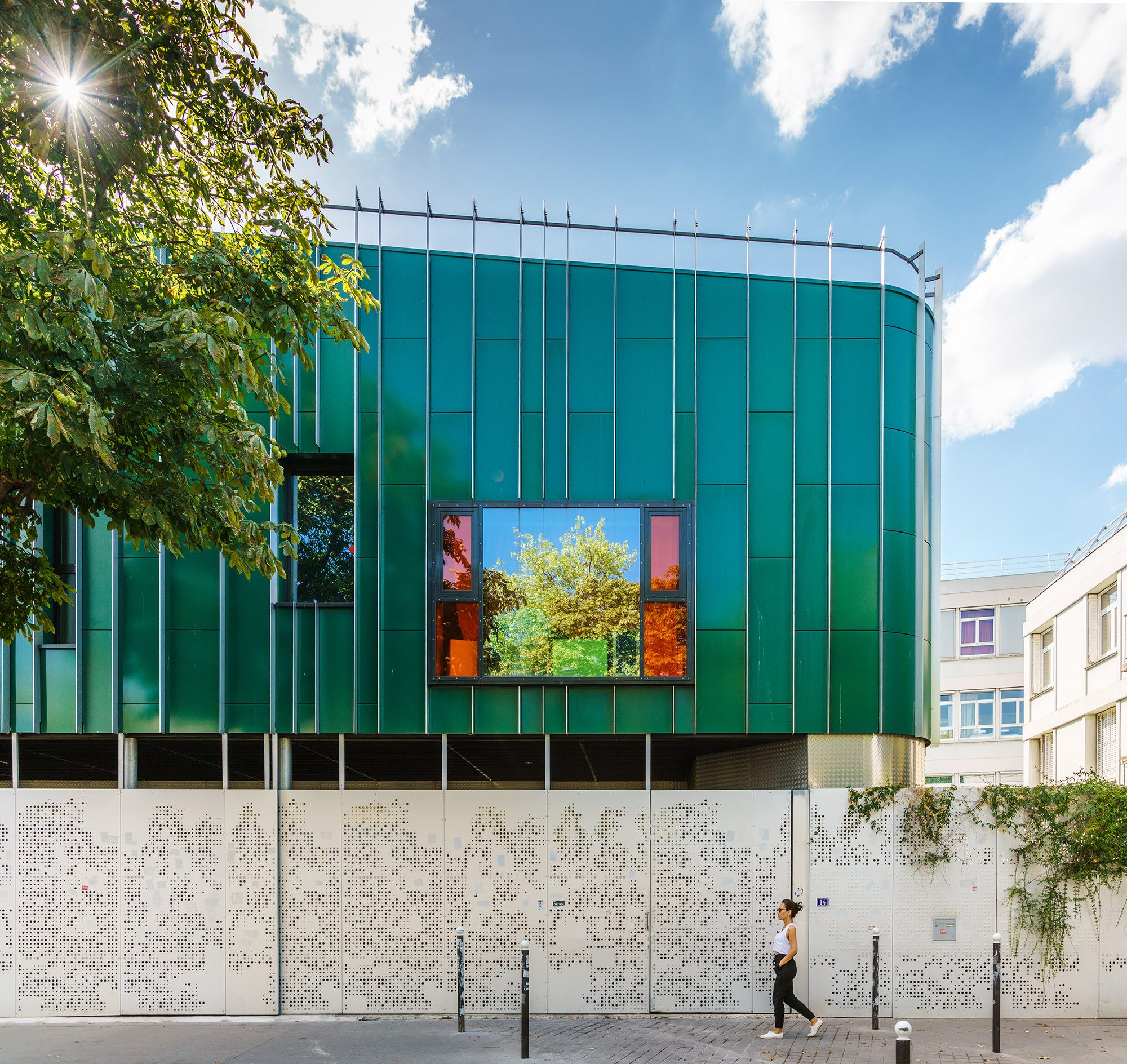 The Lamoricière school, also conceived by the Archi5 studio, is a rather bold, vivid, creative and very attractive building with a character very adequate for the function.

The programme´s urban location and ambition imposed a necessity of a project capable of becoming a landmark within the community, a place that is open to its environment, where people can meet and mingle.

The project is part of a broader exercise to optimize overall costs and the implementation of environmental and sustainable development practices. It is to be carried out according to the objectives approved by the city of Paris against global warming, 50 KWh/m3/yr.

Pologne Cultures Actuelles is a campaign that aims to introduce the public to emergent Polish cultures. You can find more here: @pologne.cultures.actuelles